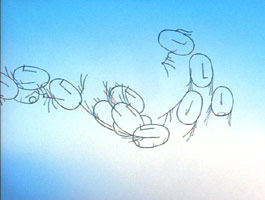 I have finally seen Don Hertzfeldt's The Meaning of Life, and it is truly an incredible piece of animation. It would be a feat for a team of animators with computer aid, yet Don animated the entire short by hand by himself and shot it with a regular animation camera. No special trickery, no CGI or computer editing, just whatever he could do by hand.

I wrote more and then realized everything I was writing about was written in better detail here.

To describe the narrative would sort of ruin the experience, though you'll no doubt gather that it is about life and evolution. At times it feels nihilistic, as the people in the film seem to serve no purpose and achieve no good. All the people are depicted just stumbling through life stupidly repeating their individual banal mantra. Yet I can't hold that the film is completely nihilistic, because Hertzfeldt animates moments of incredible beauty (spinning galaxies, creatures evolving and moving through the frame). There is also a scene towards the end with two future creatures (a parent and child), and the child creature seems to ask the parent creature about the meaning of life. The parent creature scoffs and enters into a lengthy speech in an alien language that seems to be describing his idea of the meaning of life, though he ends it with another scoffing "Hah!" and walks away, leaving the child observing a beautiful oceanic sunset described entirely by colored light.

So in the end I'm not sure what Hertzfeldt thinks the meaning of life is. A lot of the short seems like it could be more aptly titled "The Definition of Life (according to Don)," with little nagging questions about the meaning being left open here and there. Yet this short took him 4 years working 7 days a week by himself to animate, so there's something there. And the answer perhaps lies in the fact that this animation exists. Don created it. He dedicated 4 years of his life to animating something beautiful, to creating these creatures and new animation techniques. I think that, for Don's work, the meaning has to be found in the creative process as well as the content.
Posted by Ryan at 8:31 PM No comments: Links to this post

Great film. Even had good American dubbing (for the most part -- Amanda Paquin likes to change her accent constantly, which is distracting).

It has the wonderful visuals you expect from Miyazaki, the grand sense of adventure, and the thoroughly likeable and plucky protagonist (voiced well by James Van Der Beek of all people). At times I worried it would veer too far into making "nature is god" its ultimate message, but I since it only really got into that in two parts (in the mine and at Laputa's heart -- oh, and the "we protected the tree, so the tree protected us!" part), it thankfully avoided this. The "we protected the tree" line was stupid anyway, because the failing roots and crumbling stone structure nearly killed Pazu like a million times. Damn tree. 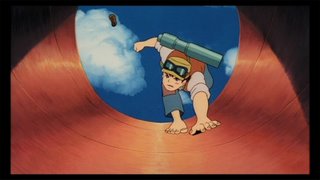 Hero Pazu scrambles up a tube

More on the visuals: I love the designs Miyazaki puts in his films. In this one, the ship designs were fantastic. It's the sort of quasi-technologically-advanced deal (like Steamboy) where the world stopped its technologocal advancement at a certain level, in this case a method of propulsion (rotors), and then went nuts developing that form of power. And I absolutely loved the guardian robots and the different modes they adopted. 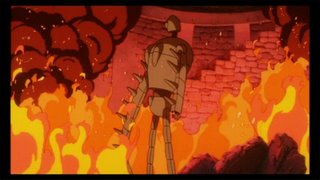 The pirates who were all brothers were hilarious. They were voiced by Mandy Patinkin (Inigo Montoya), Andy Dick (Andy Dick), and Jim Cummins (every cartoon you've ever loved). 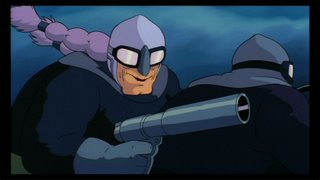 Pirate Mom on her dragonfly-esque vehicle

John Lasseter does a short introduction where he names Castle in the Sky one of his favorite movies, and it's easy to see why. 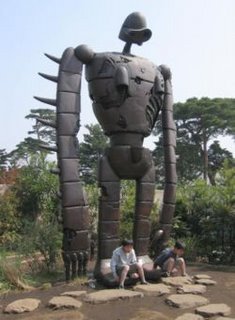 Awesome life-size sculpture of robot in some "World of Laputa" sculpture garden
Posted by Ryan at 2:35 PM 2 comments: Links to this post

As I revisited the excellent Disney production of Treasure Island for the first time in years, I was once again sold on Robert Newton's Long John Silver. What a defining performance! He established the screen pirate as we know him today.

As I was watching, though, I kept feeling an odd sense of deja vu: something about Newton's grunts and laughs and looks as Long John reminded me of someone else. I couldn't place if it was another character, or just an actor, or what. It didn't hit me until after the movie was over: Zatoichi! Shintaro Katsu's defining role featured the same gravelly voice, the same pleased grunts, and the same mischevious laughter. The more I thought about it, they even look the same! I tried to find some really good photos of the two actors to show you, but I couldn't quite find one of Newton that really nailed the physical similarities. Here are the best I could come up with: 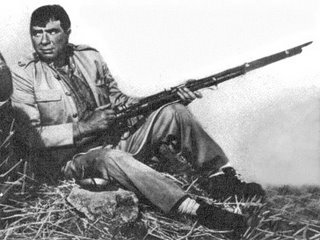 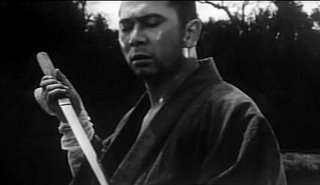 Here's another of Newton that may help: 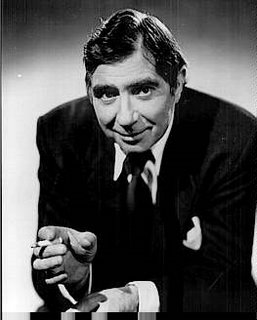 And another of Katsu: 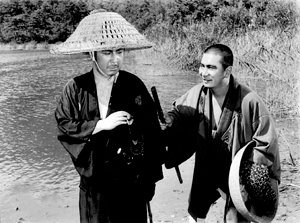 Katsu is on the right in his picture (actually, that's his brother on the left, so they look alike for a reason). Note that both Newton and Katsu have the round face, full jowls, and sly smile.

So, for all (none) of you that have seen a Zatoichi movie, enjoy this connection!

**edit** J.Ol has alerted me to the clear resemblance between the pair and Sin City scribe Frank Miller: 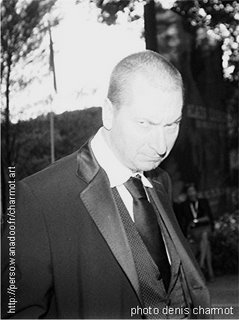 So anyhow, comments are now unmoderated, and your old and generous comments should be showing up. Please continue to quantify my popularity with "lols" and "omgs".
Posted by Ryan at 8:45 AM 6 comments: Links to this post

Stan Sakai is the man. I got his "Art of Usagi Yojimbo" book and got all inspired. I want to try his crowquill pen technique, because it works really well for him.

I think I need to meet him at next year's Comic Con and get a sketch. Sucks, I found out he never sells his original page art, just his cover art, and you know that stuff be costin' MONEY, son.

You know, it's funny, for a while I couldn't really get into his books. Sure, the art was awesome, and the stories were entertaining, but for some reason they all just seemed the same to me. Usagi rolls into town, discovers corrupt-official/demon /uber-samurai-looking-for-a-challenge, slays him, and slays a bunch of arrogant thugs as well. Repeat. And a lot of the stories are like that. But reading about the research he puts into each story and examining his art at a closer level renewed my admiration for his work.
Posted by Ryan at 4:57 PM No comments: Links to this post