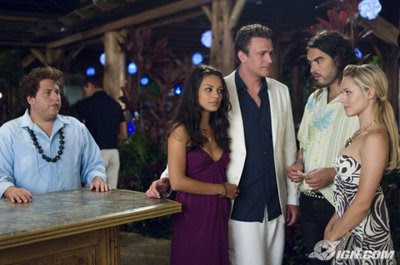 Forgetting Sarah Marshall was a disappointment. It wasn't as funny as its partners (40 Year Old Virgin, Knocked Up, Superbad) and had a lot more raunchy stuff than I was willing to put up with, which is saying something when you consider that I liked the others. Maybe that sounds a bit stupid, but that was how I came out of it.

The story is fine. It's a break-up story, and Segal has written some unique and honest perspectives into it. While the overtones are conventional, it has good story structure and follows an arc.

Some of the characters feel a bit abandoned, though. We get a good conclusion for the Peter and Rachel, and the jerky-yet-somehow-sympathetic Snow, but Sarah Marshall gets dumped by the characters and the story, and even some of the supporting characters the movie invested time in are simply left out. Jonah Hill's Matthew the Waiter is present in most of the movie as a star-struck struggling musician who gives Snow his demo, and the last time we see him is when Snow blows him off. And that's it. He's mostly there for laughs, but it felt like we got to see too much of a character for him to be left there. Jack McBrayer's Darald the newlywed is also around for the whole movie, relating to the main characters his sexual struggles with his new wife. When a movie actually cuts away to detail a character's problems, you expect them to have some meaning and find a conclusion. But apparently they were only there to pad out the laughs until we didn't need them anymore and could conclude the main story. The other Apatow movies usually have characters like this as well. Weird and funny side characters who only appear for a short time, and occasionally reappear at opportune times, but Matthew and Darald had too much invested in them to be left off (mostly Darald -- we only saw exactly what Matthew did in front of the main characters, so I'd accept him as casual casualty).

A pleasant surprise was Mila Kunis, because before Forgetting Sarah Marshall, I only knew her from That 70s Show and Family Guy, and she seemed capable of only one style of delivery. But here she shows she is indeed a genuine actress, capable of creating a sympathetic and believable character with natural delivery. Her performance in That 70s Show always came off very shallow and limited, and I assumed that was due to her abilities and not the character. Apologies, Mila!
Posted by Ryan at 8:45 AM 6 comments: Links to this post

Deviant Art is a community site for illustrators. It's been around for quite a while now, but I've never joined it. In my "Agadoni" Googling, I found this, the Deviant site of some girl from Norway. 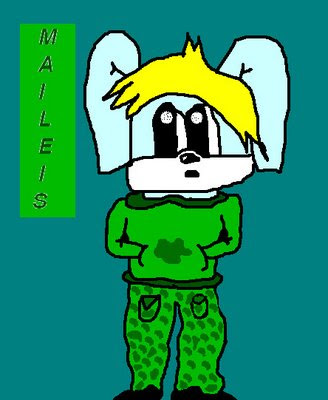 Maybe Agadoni means something in Norse? But then why don't I get any other hits from Norse websites when searching?

So, if people search for "Agadoni art" online, they're either going to find my stuff or MS Paint drawings of Sonic the Hedgehog's best friends.
Posted by Ryan at 10:56 AM No comments: Links to this post

**Edit** Found a follow-up on the same site. See the 2nd half of this post.

Every once in a while I Google "Agadoni" because all the hits relate directly to my family. New stuff pops up from time to time, and this morning it was an obituary for Albert Agadoni, my great grandfather who died in 1932. My grandfather had told me that he drowned when he was little, but I'd never heard all the details until reading this.

"Albert Agadoni is Drowned in Fall From Sea Cliff - Albert Agadoni, until a few weeks ago a Patterson resident, was drowned Tuesday afternoon when he fell from a cliff into the ocean about a mile and a half from Davenport, north of Santa Cruz. Agadoni had left Sunnyvale, where he has a service station, that morning for a day's sea-fishing, accompanied by his brother in-law, James Fasola, and William Brill of Sunnyvale. They had established themselves on the cliff and were busy fishing when Jim went some way off for a better position. Looking across the rocks, he suddenly noticed that Albert had vanished, the only trace left being his hat floating on the waves. Waves were dashing high at that point and Fasola's theory was that Agadoni had seen a wave sweep up from behind on the point where he sat and had involuntarily dodged and lost his footing. Searching parties were organized as soon as possible to hunt for the body, a party of Sunnyvale American Legion members going over to aid Frank Totman of Santa Cruz, brother-in-law of the deceased, sighted the remains once and attempted to catch them in a net he had in the boat but was unsuccessful and the body disappeared again. Agadoni's handkerchief, pipe and pocket book were recovered from the water, however. The dangerous cliffs, rough water and beds of seaweed along the coast at that point made the search difficult and dangerous. Charles Gustafson, father of Mrs. Agadoni, has made a couple of trips over to render aid, and brought the three children back, but Mrs. Agadoni is staying at the coast till the hunt is successful. The deceased was 39 years of age, a native of Switzerland, and had been in this country about twenty years, much of the time in this vicinity. He was a leading worker in the activities of the Stanislaus County Swiss club, being secretary for a number of years, and was also active in the work on the Patterson Legion Post. Beside the wife and children, he is survived by his parents, living in Switzerland, and eleven brothers and sisters, most of whom reside in the East. Mrs. Fasola and Mrs. Totman, James Agadoni of Sunnyvale and Charles Agadoni of San Francisco are the brothers and sisters residing in this state."

"Patterson Irrigator, 08/05/1932, p. 2 - A hand protruding from the waves at almost the same spot where he lost his life, led to the recovery of the body of Albert Agadoni, former Patterson rancher, Sunday morning, along the ocean shore near Davenport. The discovery was made by Chas. Gustafson of Patterson, father-In-law of the deceased, a member of the large party of searchers that has maintained a five-day vigil in that area following the mishap In which Agadoni lost his life on the preceding Tuesday. The exact manner of his death will remain a mystery, but he fell from the high cliff on which he was fishing in some manner. Following the inquest, the remains were brought to Patterson, funeral services being held at Sacred heart Church Tuesday morning with Rev. A. Martins presiding. Agadoni had been an active worker with both the Stanislaus County - Swiss Club, of which he was secretary for a number of years, and the American Legion, and a large turnout of members of both organizations lined in the services. Members of the Legion comprised the pall-bearers and the Legion firing squad took part in the final rites at the grave in the family plot in Del Puerto Cemetery."
Posted by Ryan at 10:13 AM 3 comments: Links to this post

"Have you tried our Leone?"

A friend from Biola commissioned this from me. I don't know what he's going to use it for. Please excuse the spelling of "Leone"; I originally thought it was supposed to refer to a made-up pasta that sounded like Leone. I used a brush pen on bristol board. 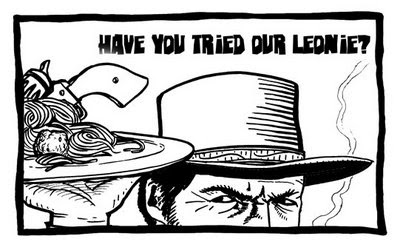 I drew this in yesterday's staff meeting. I haven't posted any drawings in a while, so figured this weird thing was as good as any. 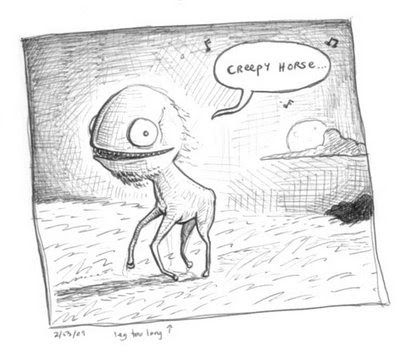 Posted by Ryan at 10:43 AM No comments: Links to this post 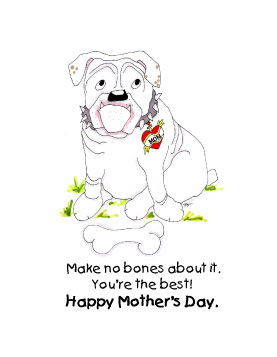 When I was in elementary school, I remember seeing posters, ads, etc. on the walls of my classrooms using a sort of descriptive language that didn't make much sense to me at the time. I accepted it, as I did most things of that sort, because "grown-ups made it, and they're smarter than me, so there must be a reason." I was reminded of these phrases recently and realized they were, indeed, stupid.

As a kid, I had no idea that to "make bones," "bone up," or "have a whale" were real phrases that meant something beyond a reference to the picture on the poster. Nobody I knew used them, kid or adult. I thought the people designing these things just had a theme like Halloween or whales and made them up. If they wanted a monkey on it, they would just say, "Have a monkey of a good time!" Years later, I discovered that they were actual figures of speech, but I still don't know anyone who uses them. Thus, I conclude that the people who made these things for kids were stupid, because no kid uses or even knows about those phrases, so the puns aren't merely terrible, they're incomprehensible to their target audience.

Can anyone think of some others I'm forgetting?
Posted by Ryan at 8:58 AM No comments: Links to this post

While driving back to work from lunch today, I saw a most bizarre combination of symbols driving in the opposite direction.

Any two of those combined makes for a slightly odd mixture, but all three has to mean something. But what??
Posted by Ryan at 3:59 PM 1 comment: Links to this post

Most Exciting News of the Year Award goes to: the announcement of Red Dead Redemption, sequel to Red Dead Revolver, concept art by my very talented and deep voiced friend, Hethe.

From what I understand it is going to be like Grand Theft Auto in the Old West, which is pretty much exactly what my dreams sound like.

I really hope they release an art book, because a book full of Hethe art that is about cowboys is the gold bar that goes with the fist-sized diamond, if I may be allowed an incomprehensible metaphor.
Posted by Ryan at 9:21 AM No comments: Links to this post

I auditioned for the Biola Spring Play last week, and I am to play the part of Brassett the Butler in Charley's Aunt. I get to speak with an accent and grow mutton chops. Should be fun. Forrest Robinson is directing, and one of my friends from Fools is the stage manager. The play will be performed "in the round," which will be interesting. I don't think they've ever done that before at Theater 21.

Charley's Aunt is a British farce, first performed in 1892, about delightful romantic misunderstandings and a dude dressed like an old lady. It sounds like it'll be really funny. Interesting historical note from Wikipedia: "It broke all historic records for plays of any kind, with an original London run of 1,466 performances."
Posted by Ryan at 9:01 AM 5 comments: Links to this post