Dang, 2009 was a real drop in numbers compared to the last couple of years.

Sorry about that (unless you're grateful). We'll see how 2010 goes. I do have a huge backlog of movies to comment about.

Anyhow, happy New Year!
Posted by Ryan at 11:08 AM 2 comments: Links to this post

I was invited on a shooting trip over Christmas break by a guy from work, but since it turned out to be a three day trip I decided not to go. But I still wanted to go shooting! So I found a place in Ramona (way out, past the Wild Animal Park) called Orosco Ridge that allowed recreational shooting.

After a long drive up a winding dirt road, we came to the spot. There was no official looking designation; it was merely a rounded ridge without vegetation, sloping down into some bushes and a ravine, with another hill leading up the other side. There were several trucks at the beginning of the range, firing off all sorts of pistols, rifles, and shotguns, so we made our way to the far left side that had only one occupant. (We observed that we were the only non-truck on the ridge that day.)

Our neighbor turned out to be shooting two old cap-and-ball revolvers! He had a Starr revolver and a LeMat, both unusual guns. (See below: Starr from Unforgiven, LeMat from The Quick and the Dead.) The LeMat has a nine shot cylinder and shotgun barrel underneath the main barrel! Damon let me fire off a shot from it at the end of the day. Very cool. 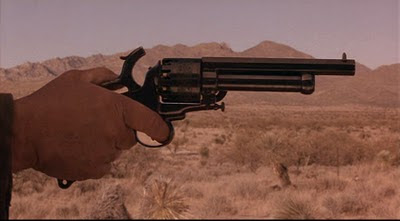 We had been told at the ranger station that we were only allowed to shoot paper targets or clay pigeons, but at the ridge we found all sorts of junk. We set up some wood planks and boards that had been left there, and found a bunch of unbroken clay pigeons that we decided to chuck for each other.

The guns: my 1851 Colt Navy (videos coming soon -- they're on my brother's camera), my double-barreled shotgun, and Ian's pump shotgun. Unfortunately, like an idiot, I forgot my bag of lead balls for my Navys, so I only had the seven shots that I had left in the case. We each only got two shots. But, I did get to load up all six cylinders for the first time, which was cool.

After those shots were up, we spent the rest of the time using up all our shotgun ammunition, which was fun enough. And I took video with my Flip! The shooters: friend Ian, brother Ben, and me. You may notice I am sporting my Clint hat and new bandoleer.