Rogue squirrels: I warned you!

Squirrels have begun their assault.

Ok, this all goes back to when I was bit by one at the beach when I was 12. I had to get two gigantic shots, and one was *eernk!* right in the butt. I think the needle was as thick as a crayon, and about as sharp as one as well. That squirrel was just an initial testing of our defences, a scout, but this...

This is the full-scale assault.

Arm yourselves.
Posted by Ryan at 8:58 AM 3 comments: Links to this post

I drew these up for a Talbot guy's intramural Ultimate Frisbee team. Originally he had wanted a monkey (my reputation preceeded me), but they settled on the Talbot Tiger team name (which is pretty funny), so he had me draw tigers instead. Here are the two versions I came up with:

This first one works ok, though I think I would change the face if I had to do it again. 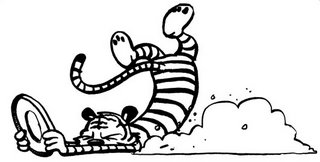 This second one gives off a very "Hobbesian" feel, I know. The face is striped differently, though, just so's you know. When researching tigers (I've never drawn a tiger before), I looked up real tigers, Hobbes, and Tony the Tiger. The guy who commissioned me told me "Tony the Tiger feel," but I didn't know how to do that without making it Tony the Tiger.

This leads me to the complaint portion of this blog.

Most folk know little to nothing about the professions of illustrating and graphic design. That's ok, actually; I was the same way until I majored in it. Nowadays I am constantly attempting to educate people on the subject, as it is a major source of frustration. Take this Talbot Tiger thing for instance:

I had done a simple monkey illustration for this guy's wife last year. It was for her personal message board on Writing and as I didn't see it getting a lot of exposure or being used for profit, and since it was going to take me 1/2 and hour to an hour, tops, I only charged her $10. It was sort of an arbitrary figure. I knew it was low, but I felt bad charging regular market price. So I did it, she loved it, all was well.

Her husband found me last week and solicited a drawing for his Ultimate Frisbee team. (Incidentally, he was sporting a shirt with the monkey drawing I made for his wife on it. She's selling shirts now, which made me a little antsy, though he assured me she made very little profit and I honestly can't imagine her selling many of these things anyway.) He said he wanted a monkey diving to catch a frisbee or skidding on the ground, frisbee in hand. "$10, right?" he asked.

"Uhhh...sure," I replied. Well, it's another monkey, and they're fast and easy to draw for me, so I guess $10 is fine. The way he said "$10" made me anxious, though. Does he think that is my going rate? I have to assume he knows nothing of illustrating as a profession, like minimum wage for illustration is $25 an hour. And that's fine. I don't expect people who aren't "in the industry" to know that. I also assume he doesn't know about Use Agreements, like that the rate goes up if he intends to sell these shirts for profit. Just to cover myself, I tell him that if he decides to sell the shirts, the $10 contract will be renegotiated. He agrees with this, though he gives me a look that says, "Don't be greedy. This is your hobby. You should be happy to get $10 for your doodles." That was probably just in my head. I don't think this guy wants to cheat me or anything like that, but I get the vibe sometimes that people view illustrating as a hobby and not a profession that I spent (and continue to spend) a lot of money studying. I don't think this view comes from malisciousness, or even wilfull ignorance. They just don't know.

And I'm a push-over so I charge next to nothing.
Posted by Ryan at 10:19 AM 6 comments: Links to this post